With the news that Lindsay’s heading for jail time, Sam Ronson reunites with her ex to offer her support

Proving that theyve finally got over their bitter split, Sam Ronson and Lindsay Lohan have reunited in the wake of LiLos prison sentencing.

With news that her ex is soon to be jail-bound, Sam has popped back into Lindsays life to offer her support.

The DJ took the troubled actress out for dinner last night in Beverly Hills  marking the first time the pair have been seen in public together for over 9 months.

Joan joked: Lindsay Lohan said she wouldnt mind being under oath, because she thought Oath was a Norwegian ski instructor.

Which was shortly followed by: Lindsay Lohan is so dumb. Her idea of being sworn is cursing at the judge. 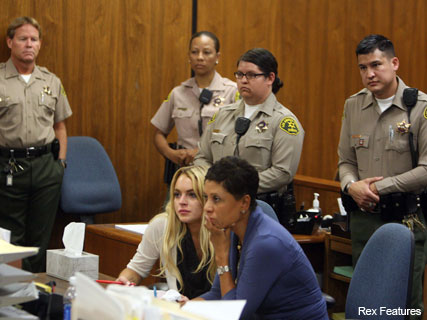 An angry Sam then Tweeted back: Hey Joan Rivers, you have collagen older than Lindsay  pick on someone your own age, oh wait, I guess people that old cant hear.

Lindsay then jumped in, to thank her ex via Twitter, saying: @samantharonson thank you : ) I love yams x

Yams? Were not sure if thats her nickname for Sam, or if shes referring to the sweet potato But either way, weve got a sneaky suspicion that were going to see more Lohan-Ronson reunions in the very near future.