Does Cameron Diaz have a brand new man? The stars been spotted hanging out with an unidentified guy while taking a break in Brazil.

Cam was first spied with the newbie while having lunch with friends at a pavement cafe during her trip to Rio de Janeiro.

And the mystery man was later spotted with Ms Diaz again, admiring the view of the city from her hotel balcony.

Wrapping her arms around her brand new man, Cameron held up her phone, and snapped some pictures of the view.

So could this be a new beau for the star?

But just weeks ago, when asked if she had anyone special, said: ‘No, no, no. I’ve been in relationships since I was 16 years old. In the past three years, I’ve made a conscious decision not to be in a relationship for as long as I want. Making the most of her promotional trip to Rio, Cameron also took time out for a helicopter ride over the city. 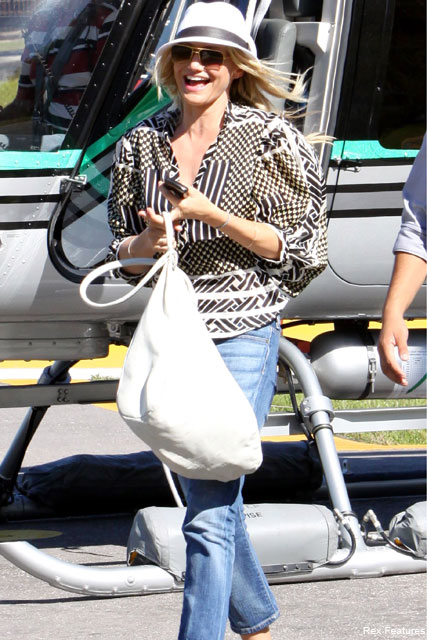 Dressed in black and white checked shirt, aviators and a cute straw hat, the star beamed as she stepped off the chopper.

Would you like to see Cameron settle down with her brand new man? Let u know your thoughts in the comments box below.