Yesterday, Catherine the Duchess of Cambridge was out not once but twice, and made some interesting sartorial choices. Her first engagement was with the Henry Fawcett’s children’s centre in Lambeth, for which she opted for bright colours, something Princess Diana always did when she visited children.

Kate Middleton wore a bold purple blouse by Gucci, which she paired with tapered navy trousers and an Aspinal bag. The top in particular caught peoples’ attention, and not because of its colours, as the Duchess has never shied away from this in the past.

No, people were talking about it because she appeared to be wearing the shirt the wrong way round. Normally, it is designed to be worn with the buttons down the back, but she was wearing with them at the front. 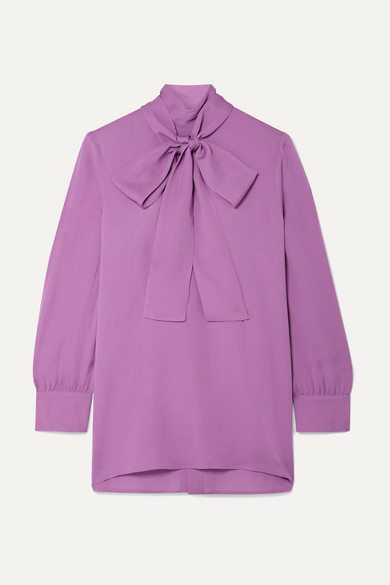 Gucci's blouse is designed in a beautiful purple hue that is so fresh for the season - especially if you tend to wear darker colors. Cut from fluid silk-crepe, this style has a loose silhouette and features fabric-covered buttons that run down the back. Gently knot the pussy-bow ties or leave them loose for an undone feel.

The pussy bow can be tied any which way however, and Kate had hers at the front too. Did she do it on purpose? Or did she make a simple mistake like we so often have?

Either way, we can all agree she looked fabulous regardless, and you would never tell.